Last week I wrote about my 1 month experience using Apple’s Leopard and the couple of flaws that surfaced. Since that time I’ve had time to play around a bit more and some more eye candy melted :-)… 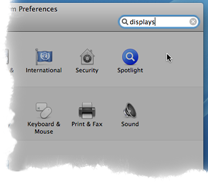 The new system preferences pane (control panel to Windows users) has also received a nice sprucing up with a lot of new little customisations and tweaks added. Particularly like the redesigned layout of the network preferences as well as the sharing preferences. One thing sticks out like a giant’s sore thumb though: search doesn’t work!  At all, that is – both out of the box as well as with the latest system updates.

Seems like Spotlight’s batteries died out here and its back to hunting for that darned checkbox in the dark.

I’ve been quite eager to try out DashCode for myself – particularly as a I’ve been meaning to getting around to build a couple of widgets for some time now. I’ve found DashCode to be well designed, generally helpful and quite a good IDE overall. Except for one thing: technical help.

It’s great that DashCode makes use of certain proprietary Apple controls (like the Popup Button). Yet, seeing how these controls don’t quite function in the standard HTML/JavaScript fashion, one would expect some form of documentation. However there isn’t (or if there is its too hard to find.) Apple’s penchant for making things that “just work” seems to have stopped short of helping developer getting down to business… a little different from Microsoft’s approach to Developers Developers (lol can’t help throwing that in whenever possible) which, while as corny as they make ’em, still provides incredible levels of technical support and documentation to .NET, Silverlight, etc users.